In March, Emirates launched the world’s longest flight. Moving passengers from Dubai to Auckland, New Zealand, it spanned 8,824 miles and lasted 17 hours, 15 minutes. But Dubai-Auckland’s reign as longest of the long-haul routes promises to be short-lived.

Just days after Emirates inaugurated that service, Qatar Airways announced that it would begin flying the 9,034-mile route from Doha, Qatar, to Auckland in December.

Those twin events could be viewed as a back and forth between the rival Persian Gulf carriers, and surely regional competition for the New Zealand market played a role in Qatar’s quick response to Emirates.

But the events are also part of a growing industrywide fight over ultralong-haul routes, regarded loosely as flights of 15 hours or more, as more efficient aircraft and cheap fuel have made such service feasible.

Within just the past seven months, Singapore Airlines announced a plan to resume the approximately 9,500-mile, 19-hour route from its city-state home to either Newark or New York JFK in 2018, and United announced a plan to fly directly to Singapore from San Francisco. That 8,446-mile, San Francisco-to-Singapore route, which is scheduled to commence on June 1, will be the longest serviced by a U.S. carrier.

Meanwhile, Emirates still has its sights set on flying the 17 hours, 35 minutes between its Dubai hub and Panama City. The carrier has delayed the start of the route twice since announcing the plan in August, but it now says service will begin late this year or early in 2017. 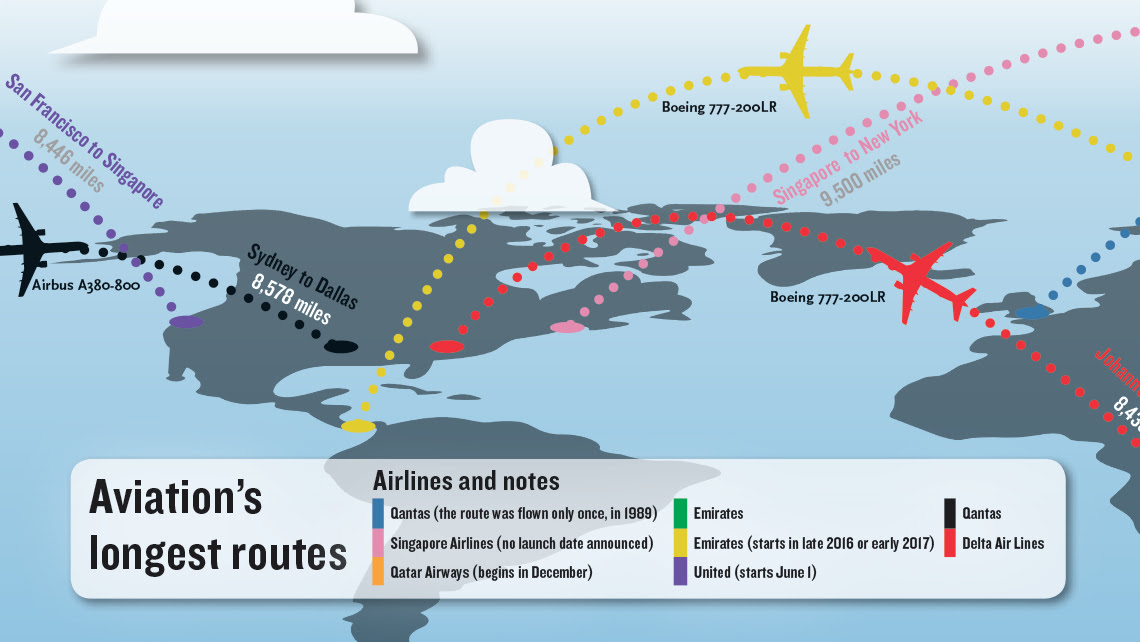 While a certain prestige accrues to the carrier that can boast that it flies the world’s longest route, airlines insist they are chasing markets, not publicity.

“What really matters is offering customers something that meets their needs profitably,” said James Boyd, a spokesman for Singapore Airlines. “If that happens to be the world’s longest route, there are certainly some bragging rights.”

“We’re not really thinking we want to go out and offer ultralong-haul flying,” he said. “We just want to connect as many top business locations as we can. And if they’re ultralong-haul, that’s just more of a coincidence for us.”

The efforts by airlines to push the distance limits on established city pairs might have been harder to imagine in 2013, when Singapore ended its direct routes to Newark and Los Angeles as oil prices topped $100 per barrel.

Now, carriers enjoy the benefit of oil that costs less than $50 per barrel. And though it may seem counterintuitive, said Seth Kaplan, an aviation analyst who is a managing partner of Airline Weekly, fuel actually encompasses a higher percentage of the total cost on ultralong-haul flights than on shorter routes. That’s despite the fact that longer flights benefit from flying farther after the most fuel-intensive phase of the service, the takeoff.

“On shorter flights, a larger portion of the cost is in baggage handling and on-the-ground stuff,” Kaplan said. “Proportionately, long haul is all about fuel.”

The longest routes also suffer a fuel-efficiency gap compared with shorter flights because they’re burdened by the sheer weight of the jet fuel they must carry.

Cheap fuel has made ultralong-haul flying more viable again, but it’s just one factor in the surge of extra-long routes that both analysts and airlines predict will not end soon.

“You’re going to see more of these routes,” said Richard Aboulafia, an aviation analyst with the Fairfax, Va.-based Teal Group, which specializes in aircraft technology. “You just are.”

One reason, Aboulafia said, is that airlines need to differentiate themselves, especially as they chase high-margin business travelers who are willing to pay a premium to avoid layovers at intermediary airports.

“You’re in a battle for global market share, and the old model of being totally reliant on hubs, that will never get you to the level of pricing and market access that point-to-point markets get you,” Aboulafia said. “And even if you’re dependent upon a global hub model like Emirates, you want to feed that hub from as far away as possible.” 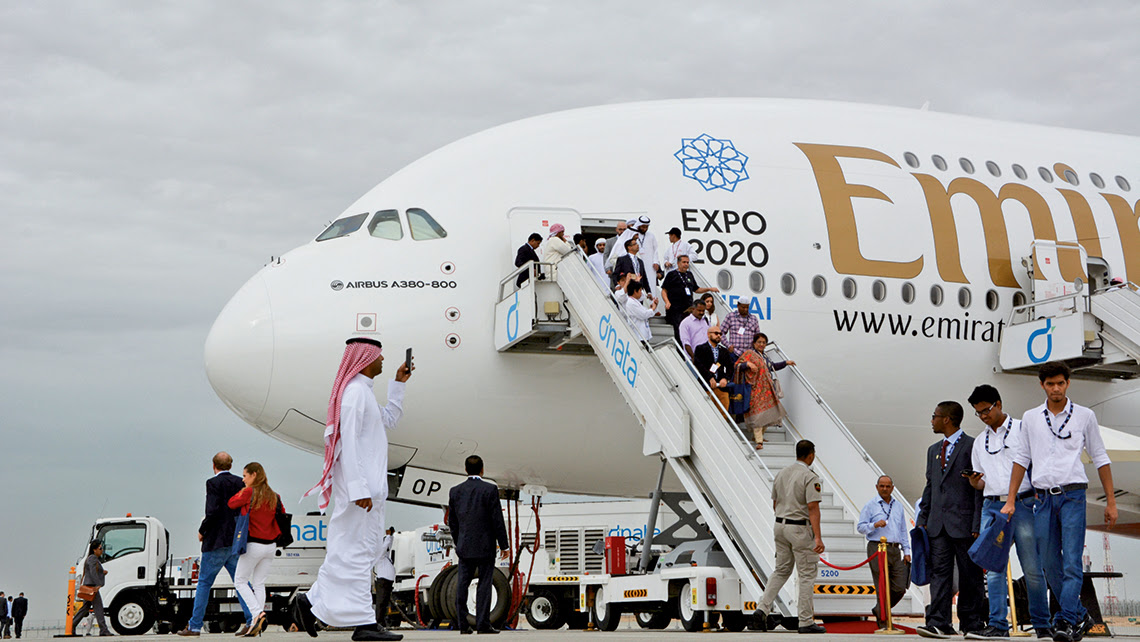 The Airbus A380, with a standard passenger capacity of 544, is the largest passenger aircraft currently in the air and the primary four-engine jet still in use for ultralong-haul flights.

Aircraft have long been able to fly far. Indeed, in 1989 Qantas flew a one-time commercial flight on what is still considered the ultimate challenge in the ultralong-haul business, the London-Sydney route. The Australian airline’s Boeing 747-400 wasn’t fully loaded that day. In fact, it carried only a crew and 16 passengers. To stretch its range, the craft flew in ultrathin air at 45,000 feet, the maximum altitude allowable, on the 11,185-mile route.

Singapore launched its Newark route in 2004, using four-engine Airbus A340-500 jets. They had originally been outfitted with 117 seats split between business class and executive economy. But by the time the route was canceled, the carrier had trimmed the seat total to 100, all in business class. Still, operating with four engines proved not to be a good enough formula in the face of $100-a-barrel oil.

Today’s ultralong-haul flights are increasingly flown with twin-engine aircraft, though the world’s largest commercial aircraft, the four-engine Airbus A380, also remains a significant player in the field.

Three of those routes — Dubai-Auckland, Johannesburg-Atlanta and Abu Dhabi-Los Angeles — along with Qatar’s pending Doha-Auckland service make use of the twin-engine Boeing 777-200LR, which is the longest-range plane currently coming off assembly lines.

First delivered in 2006, the 200LR has a standard capacity of 317 seats and is able to cover up to 9,845 miles with two engines, primarily by carrying large reserves of fuel and having a powerful engine thrust, said Jim Haas, Boeing’s director of product marketing. The heavy fuel weight bogs down efficiency, though Boeing continues to refine the plane to reduce fuel burn. 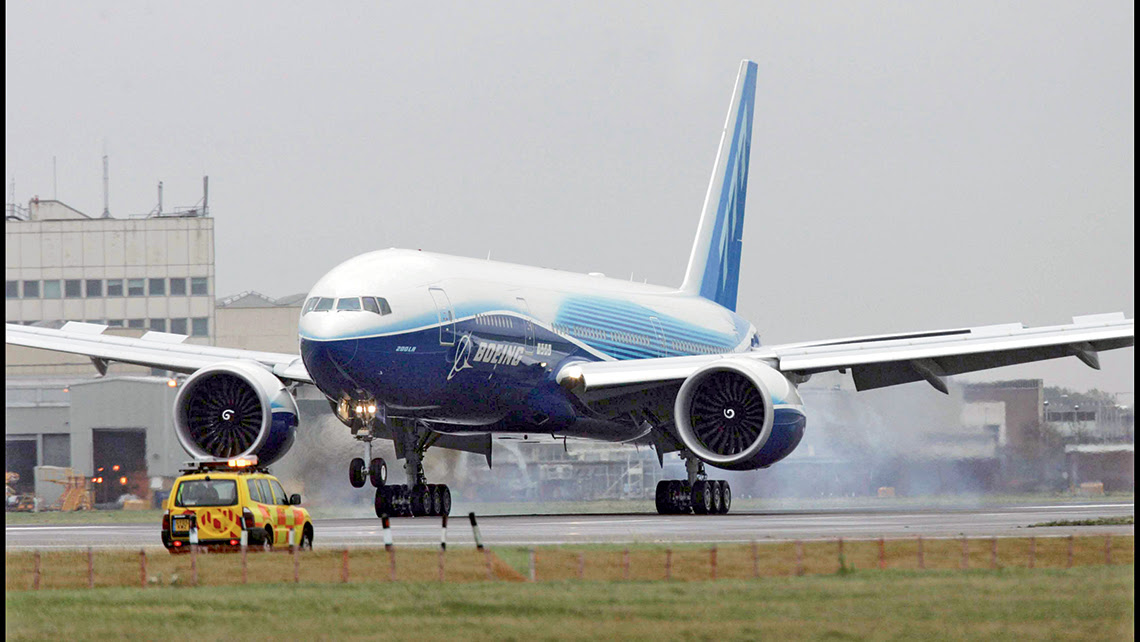 The twin-engine Boeing 777-200LR has the longest range of any current long-haul plane.

With a standard capacity of 544 seats, the Airbus A380 is the largest passenger aircraft in the sky and the primary four-engine plane still in the ultralong-haul business. Qantas uses it for its Sydney-Dallas trips, and Emirates flies it from Dubai to Los Angeles. First delivered in 2007, the A380 makes use of a large wingspan and composite materials comprising approximately 25% of its airframe to help cover up to 9,436 miles. A focus on engine efficiency, driven by the engine manufacturers, Rolls-Royce Trent and a partnership between General Electric Co. (GE) and Pratt & Whitney, is another factor in the A380’s impressive range, said Airbus director of marketing communications Alan Pardoe. He added that since the craft’s original rollout, Airbus engineers have been able to tweak factors such as aerodynamics and weight reduction to add 500 miles of range to the newest version of the plane.

But despite the A380’s range and size, Aboulafia predicted that its days as a key player in the ultralong-haul business are numbered due to improvements to twin-engine planes that he said amount to at least 15% more fuel efficient. Even a higher-efficiency A380-neo version, which Airbus has debated producing, wouldn’t be able to compete, according to Aboulafia.

One reason is that twin-engine, long-range jets, because they are cheaper to operate, don’t have to be as large as their four-engine counterparts to reach profitability. And that, in turn, changes the market dynamic for any number of routes that don’t offer the level of demand necessary to operate a 500-seat plane profitably but can fill a jet with 300 seats.

As examples, he cited the carrier’s decision to begin direct service from San Francisco to the Chinese cities of Xian and Hangzhou this year. Those routes, like United’s upcoming ultralong-haul service to Singapore, will be flown in Boeing’s new generation 787-9 Dreamliner, which has a standard configuration of 290 seats and went into commercial service in 2011.

Capable of flying up to 8,786 miles, the fuselage of the Dreamliner consists of 50% composite materials, reducing its weight. Its high-span wings also increase efficiency, and the Dreamliner employs next-generation engines from GE and Rolls-Royce, Haas said. 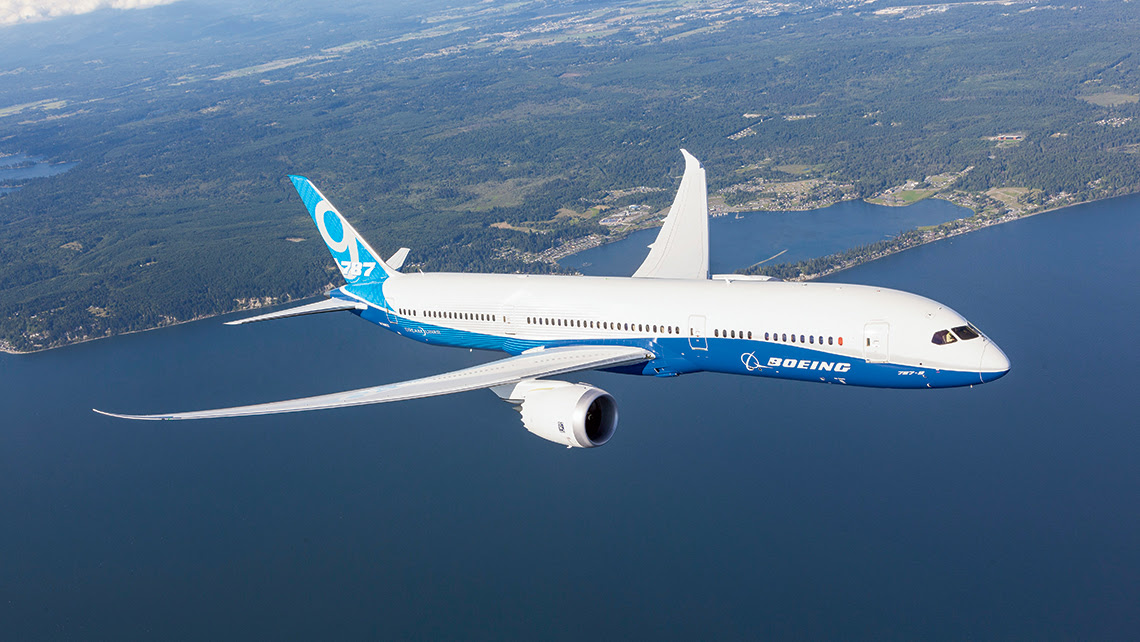 The Boeing 787-9 Dreamliner will be used by United for its 8,446-mile San Francisco-Singapore route, scheduled to start June 1.

Aside from reducing the weight of the aircraft, Haas said that composite materials hold up better than a traditional aluminum frame in the pressurized environment of a high-altitude plane. That enables airlines to pressurize their cabins to an altitude of 6,000 feet rather than the standard 8,000 feet. As a result, fewer passengers experience the effects of altitude sickness, such as headaches and fatigue.

For Airbus, its newest iteration of long-haul aircraft is the A350-900, which has a standard configuration of 325 seats and a range of approximately 9,000 miles. In service for slightly more than a year, its fuselage, Pardoe said, is wider than previous-generation, similar-class Airbus planes, giving airlines the option to offer more comfort to passengers.

The A350-900 is digitally designed to minimize weight and improve aerodynamics, and its wings are both expansive and made from 53% composite materials.

“Because it has a big wing, it has a lot of fuel capacity,” Pardoe said, adding that its fuel efficiency tops previous-generation Airbus offerings by 25%.

But even these latest generations of highly efficient planes, coupled with low oil prices, weren’t enough to persuade Singapore Airlines to use them on its 19-hour service to either Newark or JFK or its ultralong-haul service to Los Angeles.

Instead, last October the carrier commissioned Airbus to build seven ultralong-range A350s, which are expected for delivery in 2018. To bring the range of the A350-900ULR up to more than 10,300 miles, Airbus is using what it has already learned from the A350-900 to make aerodynamic improvements, Pardoe said. But the biggest change the European plane manufacturer is making is to increase the fuel capacity within the center box of the wing, adding to the overall carrying capacity by 17%.

Singapore’s Boyd says resumption of its direct North American routes will especially be a benefit for corporate travelers to the Far East, even if Singapore isn’t their final stop.

“It makes beyond-market destinations like Jakarta [Indonesia] and the Maldives available as one-stop service,” he said. 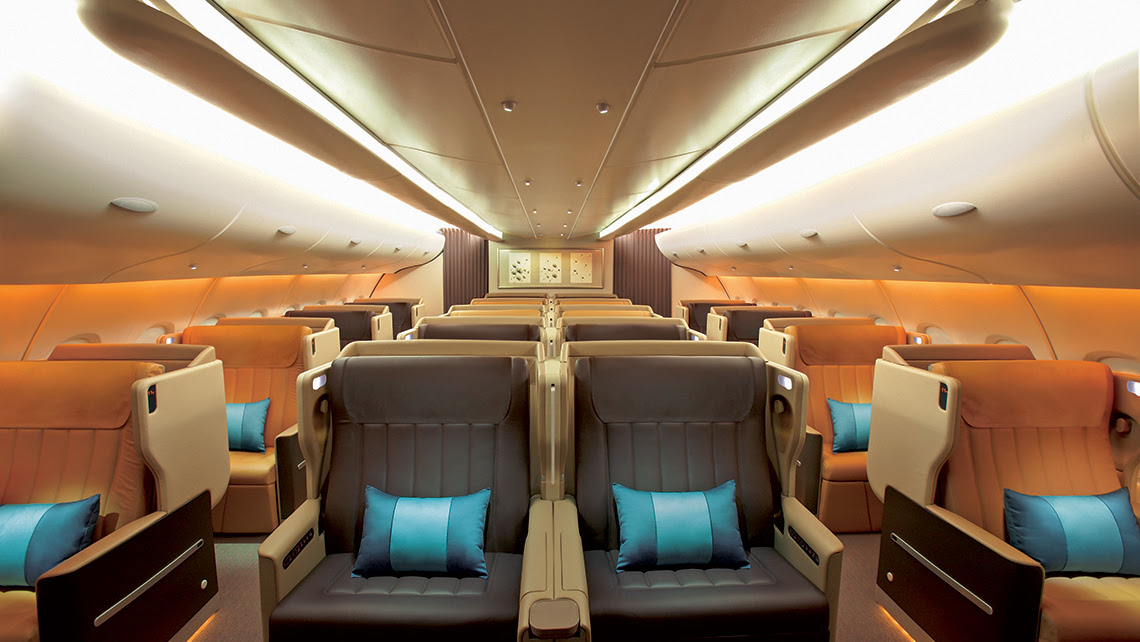 Singapore Airlines used the Airbus A340-500 in 2004 when it launched its route from Singapore to Newark. The route was discontinued in 2013 due to high oil prices but could resume in 2018 with a new Airbus design.

With its far-flung home in Southeast Asia, a growing ultralong-haul network is especially important for Singapore Airlines, just as it is for Australia’s Qantas.

Last year, Qantas CEO Alan Joyce made news when he told the aviation trade publication Air Transport World that among the uses for the eight Dreamliners the carrier has on order will be the commencement of an 8,700-mile route between Perth and London in 2017.

For now, that 11,185-mile Sydney-London route that Qantas flew one time nearly three decades ago remains out of reach as an economically viable service. But it’s not clear for how much longer that will be the case.

“We talk about Sydney to London. That’s the type of thing that the 777-8 might be able to handle,” Boeing’s Haas said optimistically. “And that would certainly be the gold standard of ultralong-haul routes.”

Eight million people have already booked their holiday travel for 2017. Have you? Malaysians travelling by air need to know their consumer rights